“You’re positively, absolutely in the mood!”

What are The Silver Lake Sisters?

The Silver Lake Sisters are the 1930’s-era “owners” of a little place at the end of Buena Vista Street in Disney California Adventure where a lot of people stop to grab a cup o’ joe! The walls there are decorated with mementos from their glamorous musical performing past.

They have recently reunited their vaudeville act to help bid farewell to the Hollywood Tower Hotel (or as you may know it better – The Twilight Zone Tower of Terror), which will be closing in January 2017 to be re-themed to Guardians of the Galaxy.

Presenting a comedic set of half a dozen period songs, they are currently entertaining the crowds waiting to enter the spooky hotel elevators for a wild ride!

Who are the performers?

Dolly, Dottie and Ethel aka Fiddler, Fifer and Practical, the lovely owners of the eponymous café on Buena Vista Street, are also known as the performing act of The Silver Lake Sisters!

The three girls feature in this show while singing live against an instrumental musical track.

When and where can I find them?

Scheduled to appear only during Halloweentime at Disney California Adventure, The Silver Lake Sisters can be found generally between 11am-6pm inside the lobby of the Tower – basically right at the front of the attraction queue. This means logistically that you need to be in line (standby or FastPass) when the show starts in order to see them. Times are not announced nor published, but you can ask the Cast Members at the entrance when the next set will begin and work your way through the line accordingly.

Sets are approximately 20 minutes long and occur about once per hour.

Mousertainment Tip: If you want to see The Silver Lake Sisters perform, I’d suggest checking with the Cast Members at the entrance for some of the upcoming set times and then grabbing a FastPass covering one of those hours.  That way, you can enter the FastPass queue just prior to the start of a show.  You don’t have to go on the attraction, but this will allow you into the lobby area itself without waiting an hour or more in the standby line.

While I love that their performing location matches the theme and era so nicely, it is an awkward place to host a show that more people would get to enjoy if it were situated just outside the attraction rather than within it! 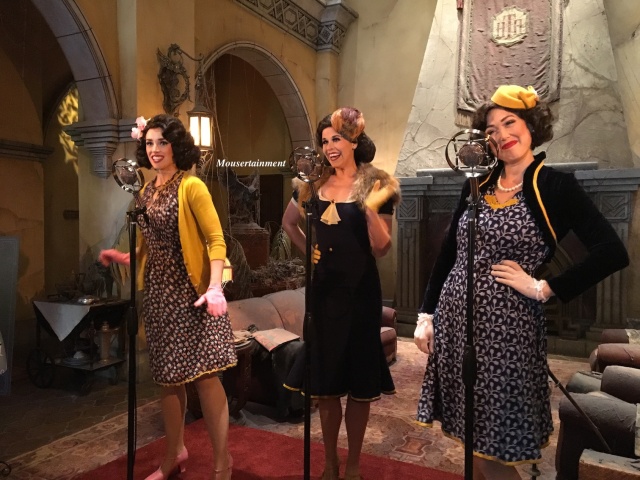 The Silver Lake Sisters were EXACTLY who I thought they would be – a girls group literally singing Andrews Sisters music (with a little Glen Miller thrown in for good measure). And they were perfect. From their look to their sound to their jokes to their choreography – everything about this show was absolutely spot on! They were a total fit to the theming of the Hotel and to Buena Vista Street itself and as a show they were a sheer delight!

It was like having an echo of Minnie’s Fly Girls back in the park again – even if they’ll only be around for a few weeks.

The only disappointment for me was to not get to hear “Boogie Woogie Bugle Boy” when so many other classic Andrews Sisters tunes were sung – from “The Beer Barrel Polka” to “Bei Mir Bist Du Schoen”. But every song they do sing is just win win win!

Really, do yourself a favor if you’re in the neighborhood and “drop in” on the Hollywood Tower Hotel during Halloweentime to cheer your ears with some classic girl group big band-style music!

Have you been to see The Silver Lake Sisters yet? Do you wish they’d sing outside of the Tower or do you like this unique performing location inside an attraction?

Update 11/11/16: I’m thrilled to report that due to popular demand, The Silver Lake Sisters have extended their run at the Hollywood Tower Hotel!  They can be found Fridays through Sundays from November 11th to January 1st.  Their current hours (subject to change) seem to be between 1pm-8pm.  Go check them out before they check out – they’re terrific!

This site uses Akismet to reduce spam. Learn how your comment data is processed.